Planting Native Trees with Tribal Partners at the Salton Sea 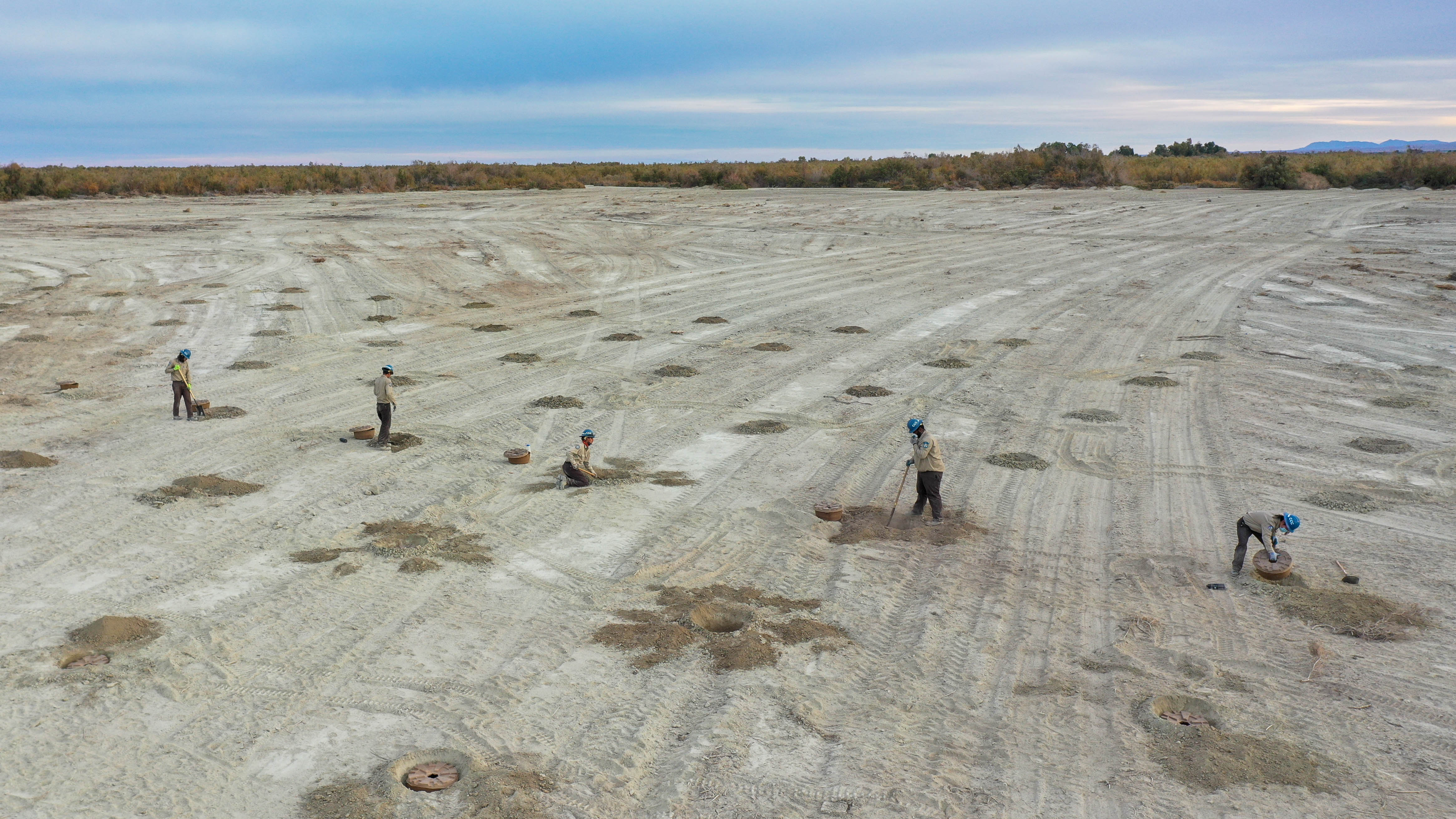 You likely already know that playa is the Spanish translation for beach. And, if you heard the term “fresh playa” or fresh beach, that might sound like a good thing.

It’s not. Acres of fresh playa are what’s laid bare as the Salton Sea recedes – land that spent decades beneath the saline water.
The salinity of the land makes for a complicated future where invasive plant species thrive while natives’ struggle and the owners of the land – California’s Indigenous Tribes – must find a solution.

“The tribes in the area lived as one with the environment,” said Chairman Thomas Tortez, Jr. of the Torres Martinez tribe.

A partnership with the Torres Martinez Desert Cahuilla Indians, California Natural Resources Agency, Coachella Valley Mountains Conservancy, and the California Conservation Corps aims to find out what native plants can grow in the tough clay of the receding sea.

Corpsmembers from the CCC Inland Empire Center in San Bernardino spent a week on the tribe’s land digging the 1,782 holes for native mesquite and palo verde plants. However, these plants weren’t just run of the mill natives.

“We’re trying for sustainability to feed the animals in the area and also people who are in tough times. If these survive, then the animals will do the rest for us,” said CCC Corpsmember Matthew Stuart of Redlands. “This is like a test project, so the tribe is testing on this site and they’re going to see how the plants grow throughout their lifetime.”

Tortez added, “Getting back to the natural habitat speaks volumes. And we’re appreciative that we have all of these partners here, the CCC and California Natural Resources Agency to help test how these native plants will do now.” 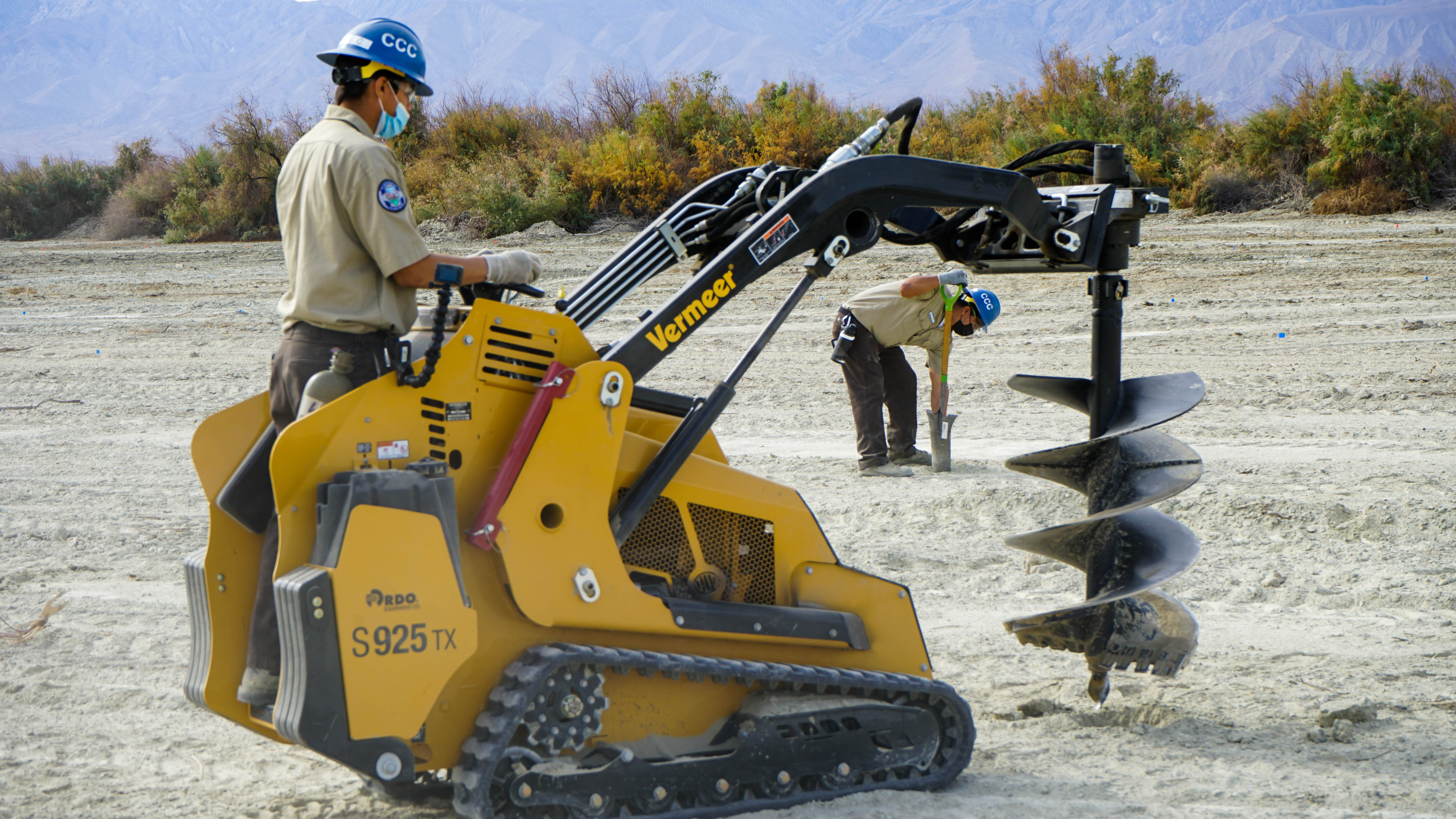 An Inland Empire Corpsmember uses a skid steer equipped with an auger bit to dig holes. A second Corpsmember prepares the next hole in the distance.

The mesquite and palo verde plants were raised with special treatments. Some were treated with salinity, others to survive potentially toxic environments due to illegal dumping in the area, and the others are not modified. The premise is to see what can survive, thrive, and expand in the area. The benefit being to the land, native animals, and the tribe.

“We’ll get to watch which ones are growing and which ones aren’t doing so good,” said CCC Corpsmember Ariana Galindo of San Bernardino. “It’s just a really beautiful project for the tribe.”

The project is physically demanding of the Corpsmembers, who essentially had to work on each planting site four times. First, Corpsmembers measured out the planting locations, with each tree and row 20 feet apart. Then, came the digging, which required the use of a skid steer and large auger bit.

“It gets in there and breaks it down, especially the hard soil,” said CCC Corpsmember Chris Charlie of Hemet. “The first time starting it was a bit weird, but then after like 100 holes you get used to it. You know those vending machines, like getting a toy? It’s like that.” 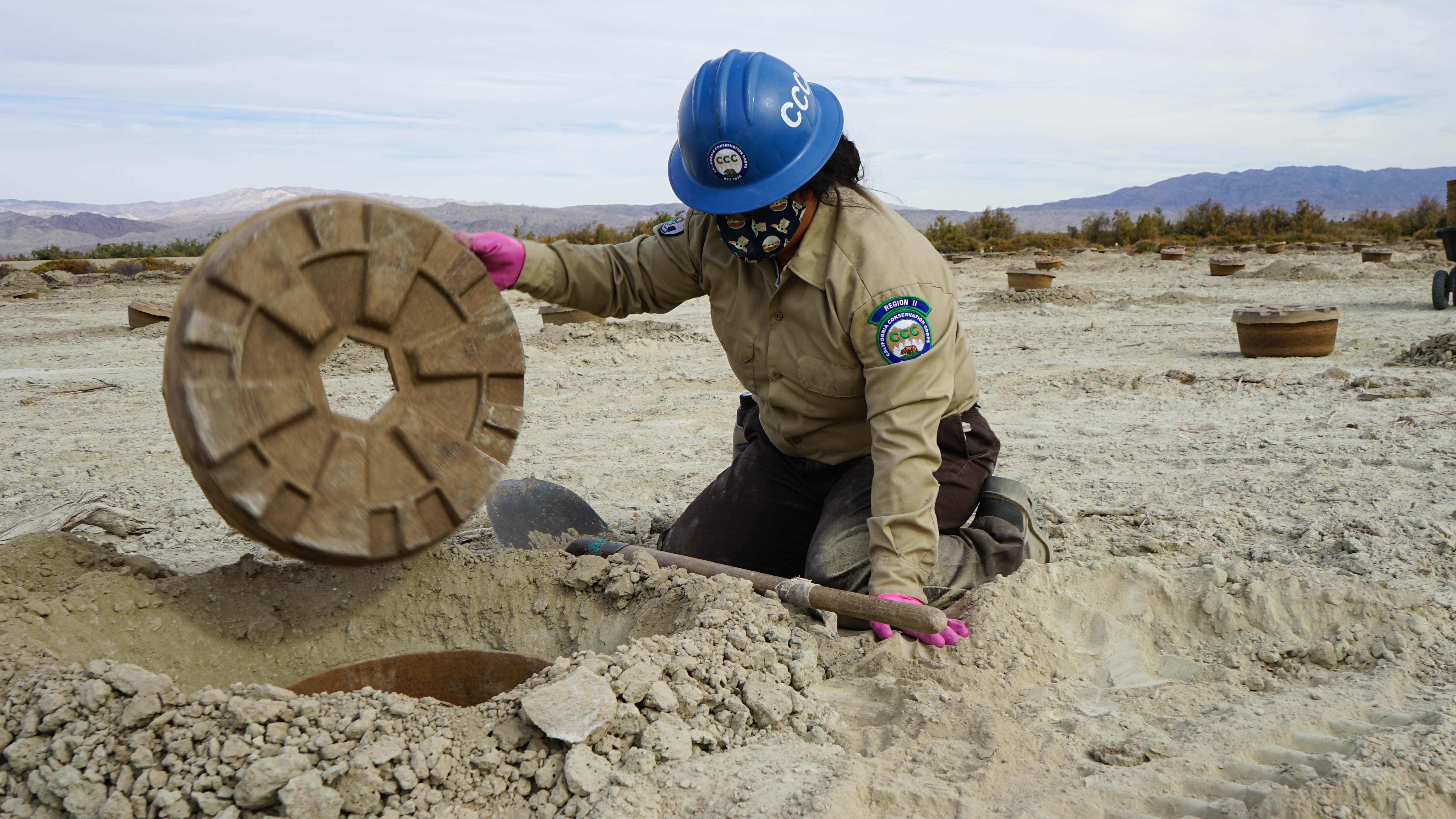 Inland Empire Corpsmember Angela Saldana checks the level of a cocoon reservoir to make sure it will fit in a hole for tree planting.

After 1,782 holes dug with the skid steer, Corpsmembers followed up with shovels to make sure a cocoon could fit perfectly in the hole. A cocoon is a biodegradable water reservoir system that is shaped like a doughnut. The trees sit in the middle and the cocoon supplies water in the desert conditions to allow for the taproot to grow strong and not rely on crews to water it regularly.

“We fill up the middle with dirt, so it’s at a good level and where the plant won’t sink in,” explains CCC Corpsmember Angela Saldana of Colton. “You put the tree in the hole, and you wait for the water truck to come and fill it up. And then you cover it up.”

Each cocoon holds about a gallon of water, which should help the seedlings grow. The hope is this small grove of natives will take off and prove to be a solution for the whole region.

“It is really unique,” Stuart said. “It’s like the more I learn about this project, the more I’m really involved now, and I’m invested in this project. I get to have a part of this. And then ten years, 20 years down the line I’ll show my kids that this is what I did.” 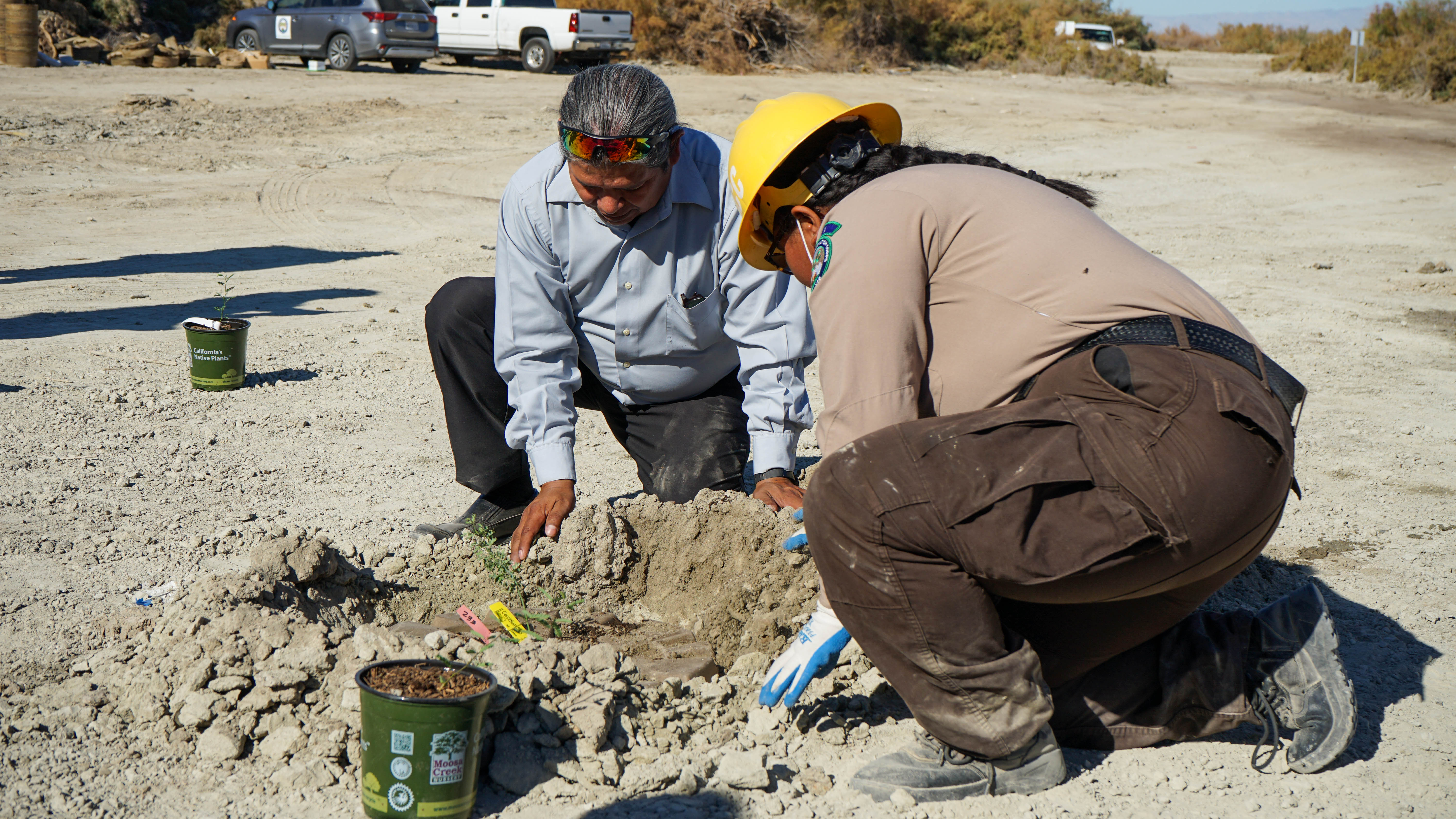