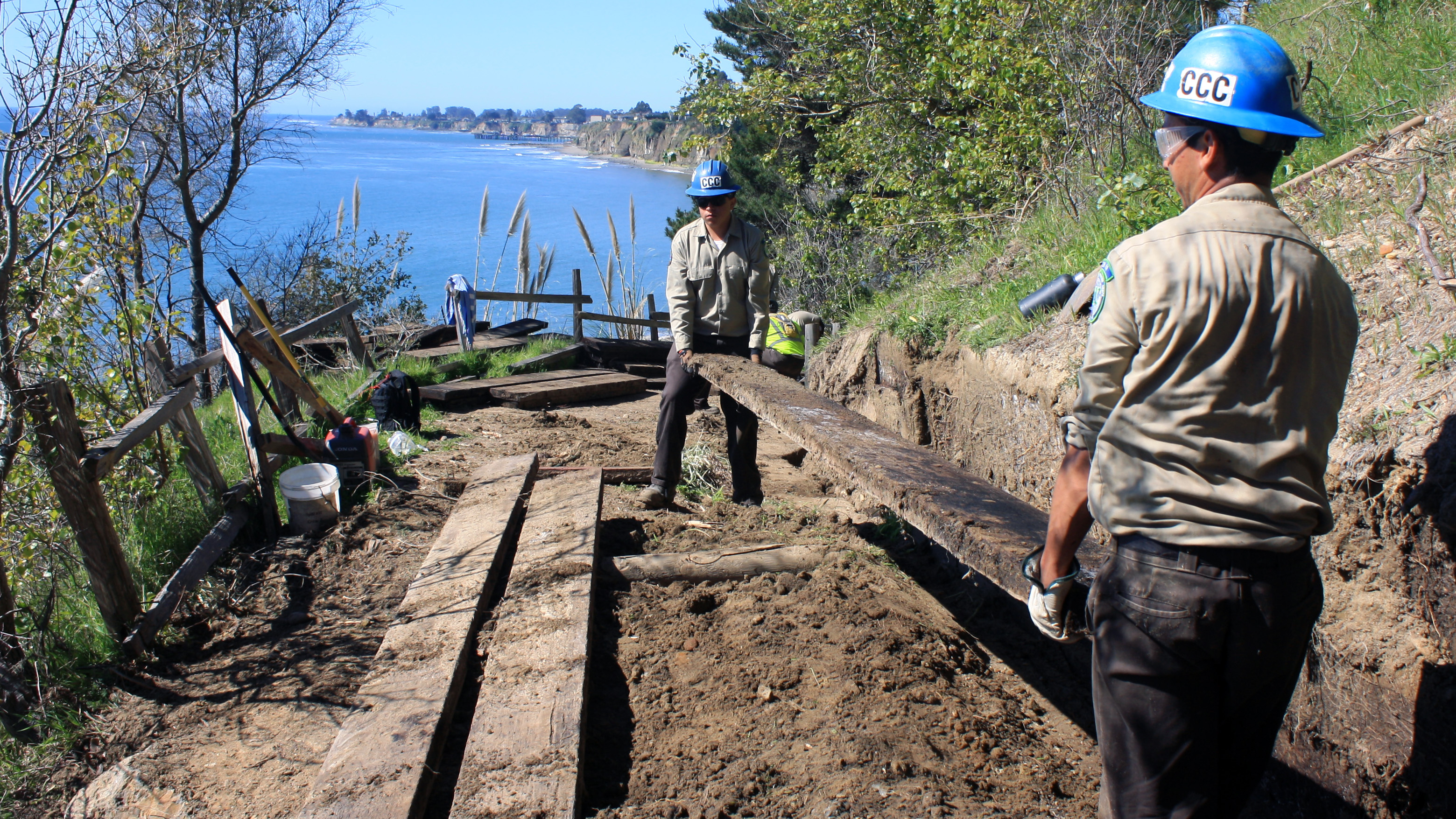 Corpsmembers remove a portion of the wooden retention wall along a closed trail at New Brighton State Beach. The crew removed landslide debris and rebuilt the retaining walls for improved safety.

Camping atop the bluffs at New Brighton State Beach offers stunning views of northern Monterey Bay. However, for the past couple of years, getting down to the beach has been anything but smooth sailing.

In 2017 harsh winter weather led to two landslides engulfing the main beach trail between the bluffs and the Pacific Ocean. While parking in the day-use area up top was no problem, the trail to get campers down to the beach was in shambles.

“A lot of the steps were just covered in dirt and mud,” said California Conservation Corpsmember Jessica Ramirez.

Ramirez, who is from Salinas, was among 11 other Corpsmembers from the CCC’s Monterey Bay Center in Watsonville and State Parks on the project.

“We’ve been working to uncover the steps and we’re clearing most of the brush near the trail at the bottom,” Ramirez said.

Corpsmembers fortified retaining walls, constructed new railings, and cleared lots of mud. The crew camped on-site, just a short distance away from the work site. It gave the group of 18 to 25-year-olds the opportunity to work longer hours and finish the trail work in time for spring beach season.

“I am so pleased the collaborative efforts of State Park staff and the California Conservation Corps repaired our beach access trail at New Brighton State Beach prior to the spring break rush,” said Chris Spohrer, Santa Cruz District Superintendent for California State Parks. “The trail looks outstanding – better than before the mudslide!”

Corpsmember Joey Olmeda added “There was barely a passable walkway when we started.”

Excavators were used to dig out the mud and load up wheelbarrows. “Then we’re using the dirt to shore up the bottom side of the trail,” said Olmeda, who is from Watsonville. If another mudslide occurs, the workers say the dirt can now run off downhill instead of covering over all the steps again.

“This is going to be an amazing little hike,” Ramirez said. “It’s going to be better for the campers on-site to easily walk straight to the beach.”

It took the crew less than two weeks to clear and rehabilitate the trail. For the visitors using the campgrounds the sight and sound of hard work was a welcome relief.

“A lot of people have been thanking us at the campground, people yell at the beach, ‘thank you,’” Olmeda said. “It’s kind of funny.”